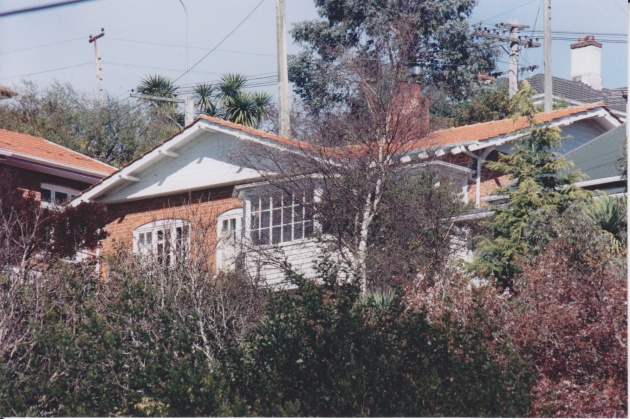 The Wilson house is one of Hooper’s plainer designs. Though the roof is low pitched Hooper created a large balcony cantilevered out from the high north wall and supported by two substantial wooden brackets. Each set of windows is placed in a shallow arch in the brickwork of the walls.

Hooper designed at least two vicarages and a parsonage but this seems to be the only one that has survived. The outside southern wall of the building is decorated in Hooper’s much favored diamond design, constructed in dark brick. Dark brick has been used again as a decorative accent at intervals of several courses on each corner of the first floor walls. The roof is a low pitched hip and the original Marseilles tiles have been replaced on most of the building. Hooper has made the most of the site using huge windows to allow light to pour into the dining and living rooms and the bedrooms upstairs.

Having designed the house for Mr Charles Gilbert White in 1914, Hooper was again commissioned in 1917 to make sizeable additions. The additions were described in Progress as, a “large open air sleeping verandah, new bedrooms etc…”. Through the use of canvas roller blinds and glazing on the two ends the verandah was designed to be usable in even bad weather.

The Harrison House is a complete remodelling of an existing villa. Hooper stripped the lining of the walls and ceilings, added two large nine-casement bays to the front rooms, new bedrooms, bathrooms, lavatories and offices and modern doors and windows – basically creating a new house. Amongst the alterations were large bay windows on the side of each front room, substantial columnar posts and a circular timber door that updated the once Victorian double bay villa into an Arts and Crafts version.

Tendered on 28th May 1917 the house in Union Street for an unknown client has since been demolished. The building once consisted of two storeys with roughcast and brick exterior, purple red slate roof finished with steel window frames.

Hooper not only designed buildings and renovations but also walls and gates. There are two such commissions in 1918.

Hooper designed further additions to Dr Barnett’s house in Stafford Street, for which he had originally designed alterations and additions in 1909.

In 1918 Hooper again revisited the house he designed for A. H. Fisher in 1908 to design further renovations as he had previously done in 1912.

As ownership of motorcars increased so did the demand for Hooper to design garages for new and existing clients. Hopper designed at least three new garages in 1918 alone.

In 1918 Hooper was commissioned to create a concrete wall and iron gates for Mr. Fleming.

The additions to this Highgate home were commissioned by a Mrs Allen. The building is still a family home in good condition. 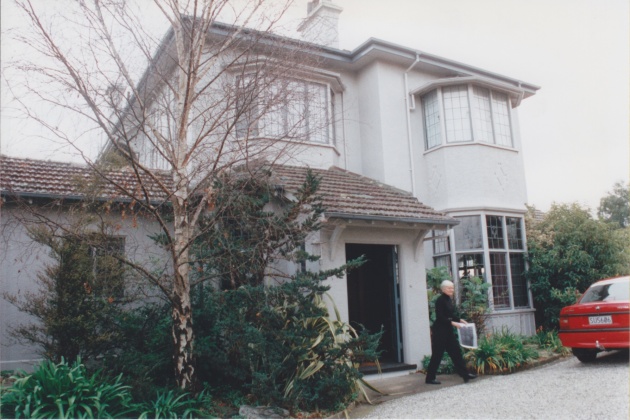 Hooper added to this large Victorian house, which was sometimes called “The Rest” with mixed results. The architect was very pleased with the finished residence, painting and publishing a watercolour perspective in Progress in 1920. The rear of the house, with small, enclosed Arts and Crafts entrance porch and multiple bay windows, clash somewhat with the serious Victorian front. The result could be described as an Arts and Crafts facade on a Victorian mansion.

Napier House is considered one of the most unusual of Hooper’s designs. It is basically a roughcast, tile roofed, two-storey bungalow on a simple rectangular plan. The austere extruded shape is broken only by two bay windows on two sides and a pair of low-pitched gables on the east elevation. Some recent alterations have taken place including the shutters which add an American colonial flavour.

McLellan House is one of Hooper’s few South Dunedin commissions. The home is single storey and much resembles Hooper’s earlier single storey bungalows. The building’s exterior is brick from ground to the lower windowsill then roughcast to the roof. The house sits on a long section that Hooper cleverly made the most of. It is interesting to note that Mrs McLellan had a nice sewing room and four bedrooms but no dining room.

Not all of Hooper’s house designs were eventuated. The plans for an unknown client  are a prime example, Hooper prepared the plans for a site in St Clair and due to extenuating circumstances the building was never started.

The house Hooper designed for Rewa Throp has simple decorative details that complement its plain roughcast finish. The curved brackets to support the gutters, recessed brick diamond motifs between the ground and first floor windows, brick eyebrows over the kitchen and living room windows and buttresses on all street frontage corners of the house all add to the pleasing street view.

In 1920 Hooper returned to a previous commission, Lambert House, which was completed in 1913, to enact additions. 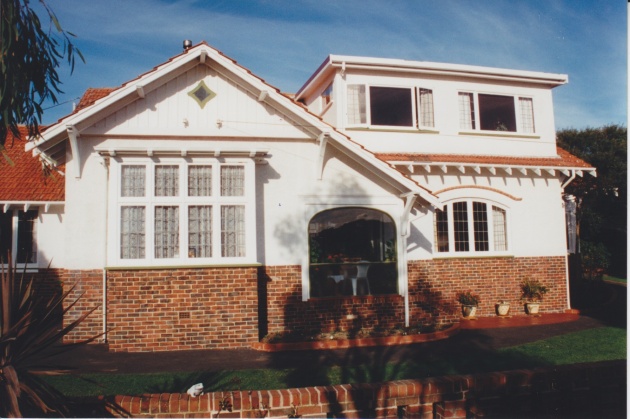 Originally designed as a single-storey bungalow with a tiny attic, The house Hooper designed for John Black has had a large dormer added to it more recently. The new dormer dramatically changes the balance of the design. The brickwork portion of the facing contains a single grey brick with the architect’s name and the date. The low pitched eaves, cantilevered gables and brick and roughcast exterior are staple Hooper bungalow motifs.

Dr Barnett’s country house is another example of Hooper’s long sloping roof that reaches from near ground level to two storeys high. The  house exhibits other examples of Hooper’s signature styles in the use of roughcast over brick exterior, a once open verandah, and bay windows.

Dr McKellar’s house at Doctors Point Road has been destroyed by fire between its completion in 1919 and 1992.

Hooper designed a major extension to this double bay cottage, adding the large room to the left with its bay window along with front and rear porches (pictured above). The lower storey was a tight fit and accessed by a new stair. The house was an Otago Harbour Board property in 1919. This would explain Hooper’s involvement, as he had been commissioned to design the pilot’s buildings for the board at Aramoana.

Ritchie house is one of Hooper’s most imposing Dunedin houses. Graham Warman photographer.

The magnificent east elevation of Ritchie house bears a resemblance to the Watson house of 1913. Graham Warman photographer.

One of many intricate details that make Ritchie house. Graham Warman photographer.

Hooper’s World is supported by